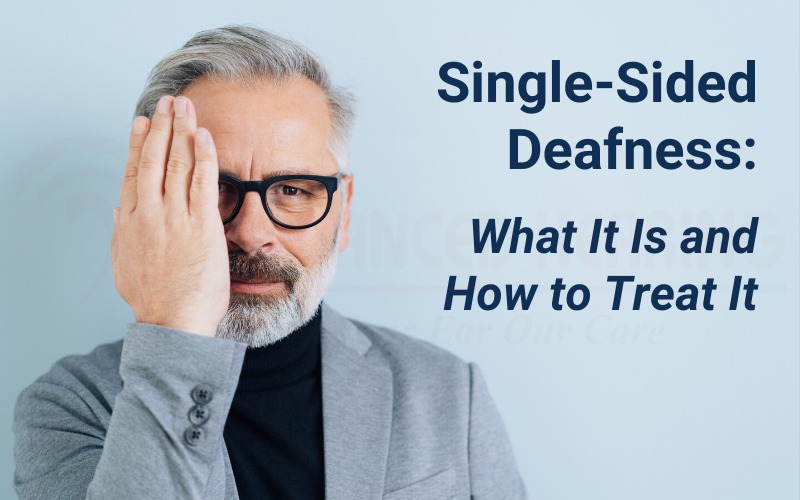 SINGLE-SIDED DEAFNESS: WHAT IT IS AND HOW TO TREAT IT

In group conversations or at events with a lot of background noise, it can be incredibly challenging to understand what people are saying.

Sitting next to friends and family and asking them to talk into your ‘good ear’ is often necessary to participate in conversations. Sometimes sounds can’t be heard at all from your deaf side which can be incredibly frustrating. Figuring out where sounds are coming from is nearly impossible. Our brains need equal sound from both ears to localize to where sounds are coming from.

If any of this sounds familiar, you may find your physician diagnosing you with single-sided deafness (SSD).

There is no cure for SSD, but don’t lose hope—there are ways you can treat it so that you can hear again on your deaf side.

Before we discuss how to treat your SSD, let’s talk about what it is and what causes it.

WHAT IS SINGLE-SIDED DEAFNESS?

Single-Sided Deafness (SSD) is the significant or total loss of hearing in one ear. This type of hearing loss is usually permanent.

It can occur at any time during your life and sometimes even overnight. In most cases, it’s caused by unknown reasons, but it can also be due to:

WHAT PROBLEMS DOES SINGLE-SIDED DEAFNESS CAUSE?

Being deaf in one ear can cause many problems and challenges in your day-to-day life. One of the most difficult challenges you’ll have to overcome is figuring out which direction certain sounds are coming from. An issue that hinders this is the so-called “head shadow effect.”

The “head shadow effect” prevents you from picking up the sound of consonants from your deaf side. They have a shorter wavelength and unlike vowel sounds (which have a much longer wavelength), they can’t travel from the deaf side to the hearing side.

Consonants carry the most meaning in speech, which can make it frustrating when trying to communicate with people – especially in an area with a significant amount of background noise.

Although it may be difficult to localize sound in an area full of background noise, using sound localization or directionality is a very important aspect of managing your SSD. Localizing sound will help you communicate better and be safer overall in your daily life.

When you can’t hear from one side, things that would often seem mundane and basic to other people, like crossing the street or going for a jog, become quite difficult and at times, dangerous.

You may find yourself in a difficult communication situation when you’re:

The above situations and many more like it can affect your day-to-day activities. You might find yourself easily irritated or become a lot jumpier than before in certain situations. If you have SSD, it’s also common to develop stress headaches from a feeling of isolation and constant communication difficulties.

Take this situation, for example, eating at a restaurant with friends. Watch as the subject is presented with the same situation, but in the second example with their deaf ear towards the person talking to them:

The deaf ear receives no clinical benefit from amplification in SSD cases. Meaning, no matter how loud a hearing aid can make the sound, the speech will never be clear or understandable in that ear. The other ear usually has normal hearing ability, although this is sometimes not the case.

The only way to completely restore binaural hearing (hearing on both sides) is with a cochlear implant. Cochlear implants have been the first choice to treat SSD in Europe for years, however, it has only recently been approved in the United States by the FDA. A cochlear implant is the only way sound can once again stimulate the deafened hearing nerve and restore binaural sound processing. While this treatment option offers the best outcomes, it is the most invasive and may not always be covered by the patient’s insurance.

In cases where patients do not want to undergo the surgery of a cochlear implant or the subsequent auditory training period, there are other treatments that can help return the sensation of hearing on their bad side, by sending those sounds into the good ear. The most common treatments used for SSD are BAHA (bone-anchored hearing aid) or the CROS (contralateral routing of signal) and BiCROS (bilateral contralateral routing of signal) hearing aid systems.

WHAT IS A BAHA?

With the BAHA, it will convert sound into vibrations and transfer them through either an abutment or magnet to the implant. This will then transfer the vibrations through the skull to the inner ear.

Hearing loss in one ear is known as Single sided hearing.

If you’ve been diagnosed with single-sided hearing, let us reassure you of two things: it’s entirely normal to feel overwhelmed; and help is at hand. Thanks to modern technology – and despite what you might have heard or read about hearing aids – effective solutions for singlesided hearing do exist. You do not have to live life only ever catching part of the conversation, nor do you necessarily have to have a hearing aid surgically fitted.

When hearing is far worse in one ear than the other correcting the overall hearing loss becomes more complicated. Single-sided hearing loss can make it especially hard to understand speech in loud environments or figure out from which direction a sound is coming. You likely have to remind people to speak toward your “good” side or have to keep turning your head during conversations in ways that can be uncomfortable or inconvenient.

Hearing care professionals frequently advocate for binaural (two ear) solutions, like wearing hearing aids in pairs, in order to better mimic natural hearing ― utilizing input from both ears to create a complete sound impression in your brain. But what happens when this is impossible because one ear is unaidable?

The answer is a CROS/BiCROS solution.

The differences between CROS and BiCROS

Some people only have severe, profound, or complete hearing loss in one ear while the other has normal or near-normal hearing. In this instance, there is no need for a hearing aid in the natural hearing ear to amplify or clarify sounds coming from that side of your head. However, wearing a CROS/BiCROS system remains a viable solution, as it enables you to hear binaurally again, and thus improves your ability to localize sound, talk on the phone, and understand speech no matter which direction it comes from. The following clarifies how CROS and BiCROS work:

So, whether your hearing loss solely affects one ear or is present in both ears (but worse on one side than the other), an effective binaural solution is still possible. Talk to our hearing care professional about a CROS/BiCROS system and test it out for yourself!

The Mechanism of Hearing: A General Overview

What is Mixed or Combined hearing loss?

What is SNHL or Sensorineural hearing loss?

What is conductive hearing loss?

What is a Hearing or Audiological test?

What are the different types and styles of hearing aids